At Cibreo Caffe, alcohol is served in varying degrees of strength throughout the day, but never without food, and rarely does a Florentine order more than one drink.

‘Il vento fa male il fegato!’ A mother yells to her children to button up, “The wind is bad for the liver!” 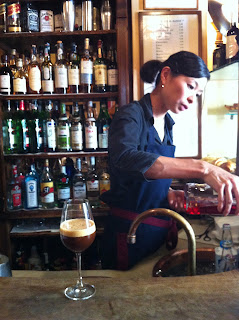 But the Aperitivo? Io adoro! It is my early evening meditation.  A crisp divine white wine, poured into a tall crystalline glass. It comes to the table, not with pattatine (Italian potato chips cooked in olive oil and sprinkled with sea salt), which I love, but with pizzette, tiny pizzas only big enough for a bit of sauce and a few capers. They come on a long plate with shiny black olives, and thin fried crisps of chick pea crackers laced with garlic. Bright yellow pepper pickles show up occasionally in a small white bowl, looking like a present from someone’s affectionate aunt.

Fabio, the owner of Cibreo, loves the advanci. He never throws anything away. Whatever is left over is used brilliantly, or at least pickled.

During the summer I acquiesce to gin and tonic or to the negroni, a strong alcolico forte! ma buonissimo. “Candy is dandy, but liquor is quicker.” Allegria to the rescue, forcing any sense of negative emotion way beyond the front lines. Two would be deadly and most unladylike, though to me, nothing is more civilized than a proper aperitivo. It ‘opens’ the appetite and stimulates digestion. The monks invented strong liquors as medicine, to be taken before and after meals. I to bow to the Italian brethren for making this ritual one of the best ingredients for la dolce vita. 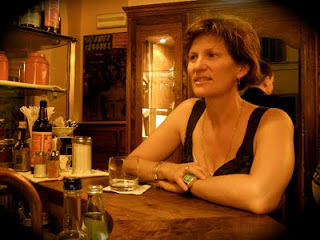 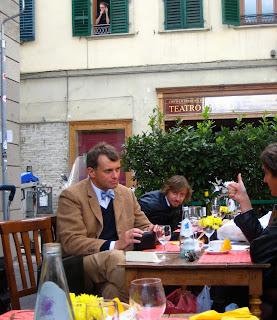 Florentines flow in and out of the bar. They greet each other casually, one looking more fine than the next. People-watching here is like flipping through a fashion magazine, but better. It’s alive.

Florentine style is understated, chic. This is not Hollywood. There is no bling. But there’s balance. It’s what you call “taste”—an eye for quality and detail. It also doesn’t hurt to be drop dead gorgeous with olive skin refined as Michelangelo’s sculpted marble. Though not all Florentine’s are or have been good looking. One look at Dante or the Medici and you understand the gene pool, yet, it’s safe to say they were intelligente da morire. The character and the way Florentines carry themselves- so confident, intelligent and interesting, comes from centuries of sophistication.

I for one, do not come from such a background, unless I was here “once before.” But I do feel at home here, un Fiorentina finta, a pretend Florentine. Especially inside my “uscio e bottega.”