Coming Home to a Country of Old Friends

Coming to Morocco is not a stretch for me. It’s like coming home.

Yet, this time, there was some worry about arriving amid political unrest, which is quite rare if ever. After Tunisia and Egypt, Morocco, Bahrain, Algeria and Libya followed suit. Some of these North African countries fared better than others during the protests, and Libya no doubt was like upsetting a hornet’s nest.

But Morocco was sane. Some thugs took advantage of the protests there and broke a few shop windows, but the demonstrations themselves were peaceful. Reform was taken seriously and the king is responding with intelligence. He was already on the trail of change, with no fear of being overthrown. On March 9, he gave an historical speech letting the people know that he was giving up seventy percent of his power. What this means is that ministers in each region will be voted in rather than appointed by him. One thing is for sure, protest or not, the Moroccan people love their King. 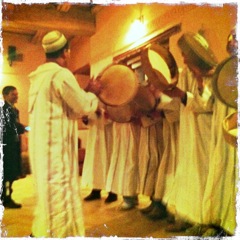 Protests in general are healthy. They effect change by the people, for the people. Europeans are taught to “manifest” in school, especially against unions, etc. The French, for example, make a habit of demonstrating. We in America are a little less willing.It’s a shame that people cancelled their trips to Morocco this spring due to fear of unrest. Those of us who know Morocco better, know that it would be extremely rare to have an overthrow. Jobs are needed and some things need to change, like certain Ministers that squander money. Is that different than any other country in the world?

Moroccan people are kind and gentle and most of all good natured. I realize that I am biased, knowing only the people that I have met within this area of southern Morocco. For the last ten years I have been working with a similar group of people in Marrakech, Berbers in the Atlas mountains and by the coast of Essaouira. I have a handful of urban, university educated local friends as well. The more I get to know them the more their sense of humor comes out. These people are mostly Berber, some Arab—but they say in Morocco, “If you scratch an Arab, you will find a Berber.” 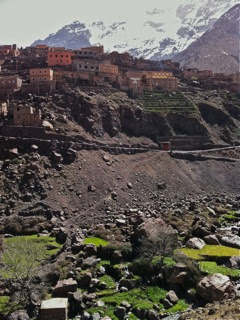 Up in the high Atlas mountains, the hospitality is extreme. The Kasbah Du Toubkal is like a home away from home. At 6,000 ft, we have a birds eye view of Mt. Toubkal, elevation 13, 655 ft. The surrounding mountains hug the Imlil valley, which is now smattered with a handful of small villages. This Kasbah, owned by Mike McHugo, a trekker turned sustainable hotelier from the UK, has helped restore an old fort that provides not only shelter for trekkers to Toubkal, but to anyone who would like to get away from it all. One of their bylines is, “40 miles from Marrakech, but a million miles from nowhere.” Up here the air is cool and the atmosphere cooler. The Kasbah is operated by local Berbers whose native hospitality is hard to beat.

The Kasbah has given men from the village a place to shine. As cooks, receptionist, drivers, mule drivers and guides, the staff at The Kasbah have become like brothers. I have watched some of them grow up. I’m allowed in the kitchen and If I need a dance party celebration for my guests, they are happy to don an instrument and gather for the “call and response” traditional music that is repetitive and somewhat trance-like. If they don’t have enough drums, they bring metal trays, spoons, forks and pots from the kitchen. They light up at the opportunity to play.

This puts a new face on Islam, and not one we are used to seeing back home in the U.S.

Don’t be afraid to visit Morocco. Come more than once if you can. Give the people here a chance to show you their hearts. Before they know how to joke or talk with you, they will give you their utmost attention and hospitality, their tea, their traditional food and friendship.