Mubarak took us up the long winding trail above the Kasbah to the closest village called Ammand. Breathtaking in everyway, the splendor of white on white is a freshness that penetrates the dullest of senses. White cherry blossoms in the green valley, practically holds hands with a snow capped Mt. Toubkal at 13,655 ft. The sky is beyond blue. The call to prayer bounces off the nearby mountains as the runoff rushes full on in a waterfall down to the valley below.

Robinhood, a Berber man with a sense of humor and selling techniques of an east coast car salesman, tries to usher us into his shop on the side of a dirt road. “My name is Robinhood No. 2. I take from the rich and give to the poor. If you don’t want to part with your money, ok no problem, we stay friends anyway. No couscous for me today. No money, no honey, no chiken curry, but if you like to buy something from my shop and support the village I will be very happy and my family will be too.”

His father is a quiet man outside in a jelaba building a stone wall on a very precarious precipice. We were a group of 8 from all parts of the country and one young woman from Cyprus. They all wanted to go in of course. I told him I would give him 100 DH if he had a safety pin to give me. My sun hat strap had just broken and it was in danger of blowing away. In the blazing sun, believe me, a hat is important!

Robinhood told me he had not heard of such a thing as a safety pin, but when he understood what I needed, he told me to give my hat to his father, that he would fix it for me. Pondering that, I couldn’t imagine what he meant. His father Omar, came over and took my hat and proceeded to sit down on a stool. He wore one of those Berber embroidered leather bags for carrying around a copy of the Koran and other less obvious things. Omar took out several dowels, a pocket knife, and a needle and thread. He said to his son, ‘is white ok?’ and proceeded to stitch my hat. His other dowels and strong thread were for fixing his shoes and his jalaba if need be.

He stopped his work to sit down and do this for me. An unexpected gesture of kindness from an elder with a sweet weathered face and knowing grandfatherly eyes. Quiet a touching moment. Mubarak told him how appreciative I was. He looked at me and said in Arabic, “I’ve seen you here and remember your face. You are pretty”.

People all over the world are genuinely happy to give to strangers when they feel useful and it can be of benefit. I felt delighted by the exchange. 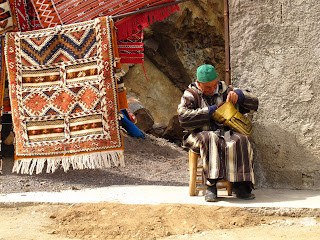 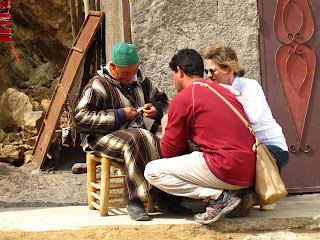 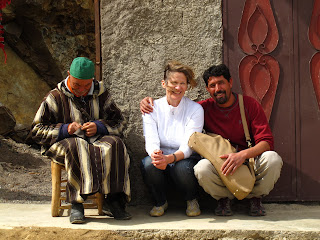