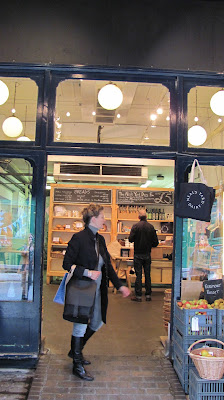 I’m in constant motion, and do get around. There’s my work, first and foremost, that takes me around, and then I fill in the blanks on the way. Why not? A London birthday party one weekend stretches into the next, with a sack of things to do and places to see in-between. An oyster card can take you anywhere in the city with a touch of “glass,” so to speak, as long as you know where you’re going…or not.

London is vast. But when I did figure it out, I felt like a queen. My friend Lori’s 50th was no small fete. Her husband Jason, one of London’s fab food photographers, pulled out all the stops not only for his sweetie, but for his lovely daughter Rae’s 16th as well. One hundred and fifty people graced tables on an off night at Leon. Jason (with family prep) did all the cooking—Turkish, inspired by a recent trip.I was inspired by the food aristocracy (the Sam Clarks, Fergus Henderson and his wife Margot, Simon Hopkinson, Ben Wright), a brocade jacket that looked like upholstery, the Shanty Band and the 150 birthday presents that took a car and two taxis to get home. An honorable mention goes to Julian, Lori’s son, who flew from Stanford for the night—just for the party and a short jet-wigged visit. Mikkey looked ravishing in red and Aida was darling. It was a dress up night. 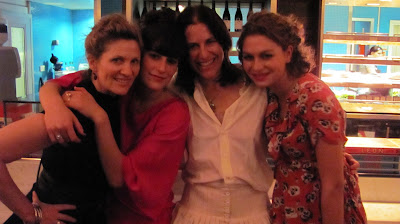 I love walking around London and I will go on the record for saying I love the food as well. Neils Yard cheese. Great Cafes. The bread. The butter. The street food. Street food? Eat St. was an all-night street food festival devoted to “taking British food forward.” And to the canal.

Which brings me to the Towpath Cafe… 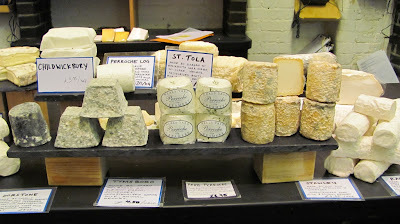 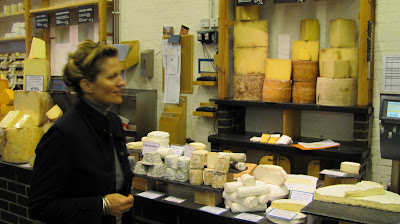 Towpath Café A brilliant stop for a “cuppa” and slice of olive oil cake. Try the porridge with stewed fruit for breakfast, or the press-grilled cheese for lunch. Ginger beer goes down easy, but so does the delectable coffee from Piansa, a café in Florence, pulled by one of the cute Towpath girls. 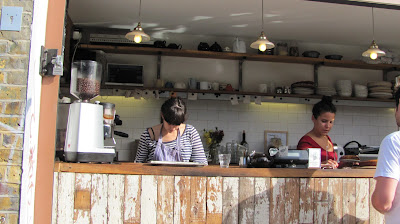 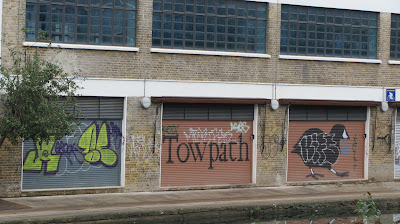 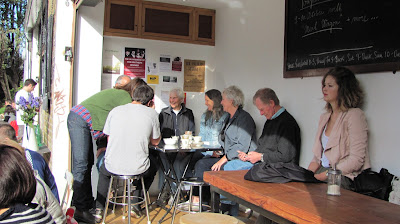 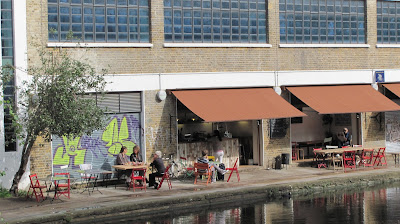 The Towpath has created a frenzy in east London’s lonely bike and walking path. There was nothing for miles along the canal until Lori and Jason saw these empty kiosks that looked ideal for a “hole in the wall” eat and drink establishment, not unlike the ones on the streets of Florence. A glass of wine, a small sandwich and via. This was the idea. They accomplished it with a flare. Sometimes they even stretch across the street. Food trucks are all the rage it seems from Portland to London. The Towpath provided quite respite on one side of the canal, while the aforementioned street food rave on the other side created quite the opposite. It went late in the night with the “Meat Wagon,” “Kolkata Indian food bus,” “The Chocolate Bus” and a string of DJs. I was pouring wine from a scaffold when I wasn’t waving my hands in the air. 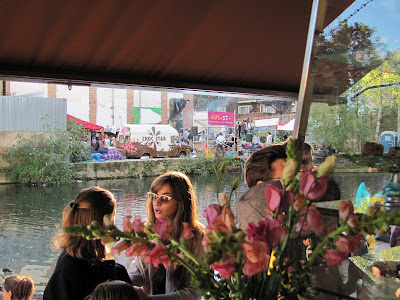 In between Buddhist teachings on the weekend and street food raves at night, I attended book signings, art openings, exhibits and visiting with old friends. In the middle of it all, I got a note that I had been granted one of the Top 10 Food Guides of Europe.I signed out of London by having Sunday lunch at a posh restaurant, called “Bistro Bruno Loubet” to celebrate. Chef Bruno and Raymond Blanc, of Le Manoir Aux Quat’ Saison, cooked together. Blanc’s Bouillabaisse was beautiful, but could have been tastier. I prefered Loubet’s plump snail in an egg custard, yet the fried spiral crackling was embarrassingly tough to eat. But not as embarrassing as when Chef Blanc came to the table at the exact moment of my credit card refusal. 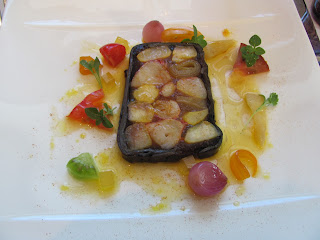 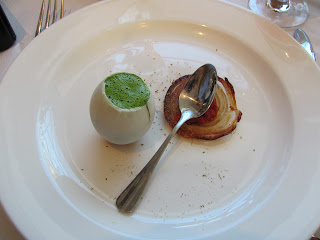 I righted the wrong with a phone call and all was well. I left the restaurant and London (and my waist) reluctantly. I wanted to stay, but Spain was beckoning. Two days later I was in Mallorca, eating my weight in aioli. Getting a ’round’,  just got easier.