Ventotene… No wind? I dare say, it’s where the wind comes from.

Our first morning sail took us around to the south side of Procida, to see the panoramic pastel houses that grace the island, all bunched together like a bee colony.

Historically, the various house colors had a purpose. A sailor could spot his house from afar and see if his wife was waiting for him in the window.

Sunny with a bit of good wind, we calculated our sail to Ventotene, 16k away at 8-9 knots, to take 4 hours. Tony Tony, our captain, has a keen sense to head straight to where the wind is. An avid sailor, he rides the waves like captain Ahab rode his great white whale.

We are not talking huge ocean waves—but the Mediterranean can kick up some activity. The adventurous part of my culinary program is often accented with a few unexpected edgy experiences that keep our name valid. This undoubtedly puts a smile on some faces and a look of surprise on others.

Today we had a slew of various ‘Onda formata..’  It took us a little longer than we expected: seven hours instead of four. The sun was shining on us and the water all the way, giving us thrills as the natural movement of the elements propelled us along. Six culinary adventurers found their sea legs quickly, and one did not, as the wind asked us to dance immediately. The waves went from onda lunga, smooth sailing, to onda fragente, a bit choppy.

The weather shifted and the wind was coming straight from where we needed to go. Not a great way to arrive in a head wind, especially sailing, so we had to skirt along the edge looking for a way in. Some of us were camped out on the bow, loving the sunbathing, until it turned to water-bathing. The front of the boat hit the waves with a crash and water splashed up onto us and the boat frangente, soaking us completely. It was rather exhilarating! Our previous plan to take a swim in the middle of the trip? Unnecessary.

We had to tack and tack and tack again, lengthening our sail for at least three hours more than we had planned. We could see the island, but didn’t seem to be getting closer to it, even though the wind was propelling us at 8.5 knots. Pretty fast sailing. We had to take away 30 percent of the sail to slow things down and to catch our breath. Our youngest fanciula (an affectionate Italian word for young maiden) was a trouper—knowing that she gets seasick, she came along anyway and decided a little too late to take precaution. The rest of us just carried on and tried to breathe. The more experienced sailors were not bothered at all. (Nothing an early Campari soda couldn’t cure as an antidote!) We dropped the sails and motored in the last hour, a bit windblown, yet happy that the day had brought us such excellent sailing.

Pulling into Ventotene’s Roman harbor at sunset was a relief.

All of a sudden our appetites came back and we ate a beautiful nicoise salad and fresh mozzarella. We had a lesson on extra virgin olive oil, its importance in Mediterranean cooking as well as discussing local ingredients, local dishes and how to embellish them with what we could find along the way.

It wasn’t enough to sustain, just enough to settle us down. Dinner on board was not an option. We needed to get off the boat and I wanted desperately to taste the local fare, knowing quite well that this island, more remote than most here in the Med, would be unspoiled and authentic. 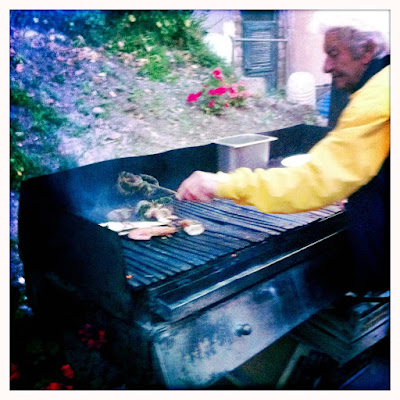 Tony Tony our captain, took us to a small restaurant named Ristorante da Benito, just off the port that looks over a mini lagoon big enough for only a few fishing boats. As I headed straight back to what I thought was the kitchen, Tony Tony said, “Where are you going? The kitchen is right here.” There was a grill set up by the tables outside. Sure enough there was old man Benito, out there grilling.

He threw everything onto the grill. A few pieces of tuna. A whole fish, prawns and curly-cued calamari. Salt and pepper were rained on them and basted with branches of mint and rosemary dipped in olive oil and garlic. A pinch of chopped aromatics were tossed on top. The fish didn’t stay long. 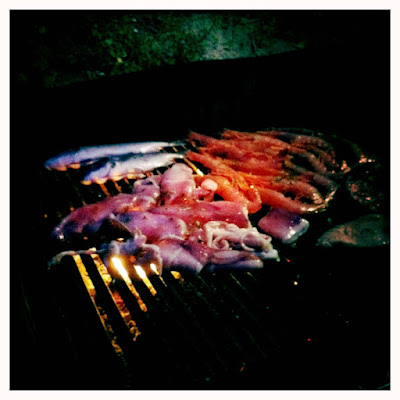 We ate plates of ‘mazzoncolle’, huge prawns. They could not have been more delicious. So simple. So fresh. We had clams and muscles to start, melt in the mouth tastes of the sea.

Benito caught my heart at 84 with a head of white hair. He spoke a mixture of Italian, German and English. They call him the “King of Ricciola;” the grand premier fisherman of lumberjack. Spry and generous, he sat down and sang Neapolitan love songs for us with such heart. A cigarette in one hand and gesture in the other, he sang sweet, soft melodies, no words any of us knew, but we sang along just the same. 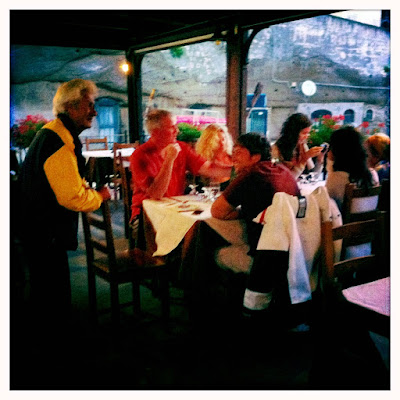 It was a great finale to a phenomenal day… even though it had put us through our paces.

Though our sail was nothing compared to the gang plank we had to walk to get up to the boat after a few glasses of wine after our un giorno faticoso. No one fell in, which made the day end with an even greater success.

The next morning, we awoke to a bright sunny day in the port. The sea? Like glass. I went fishing from the boat of a local fisherman, who pulled right up to Benito’s restaurant with the fresh catch of the day. The night before, he had told me I could meet him there, so I did. The catch was lacking, but I spied something I really wanted… a big octopus! We bagged it and I took some other choice white fish, similar to merluzzo, along with a few scorpion fish to sweeten the pot. The restaurant held the fish fresh for me while I joined the others to take a swim in the ancient Roman ruin pools.

We found a natural wave pool full of the freshest, saltiest sea water I have ever tasted. We were carried practically, the sea so buoyant, to rock outcroppings where we could dive or jump into the close aquamarine or deeper cobalt blue water. The air was a soft, breathy kiss. The girls and I could not help but pretend we were mermaids, swimming like dolphins, so playfully giving each other names like Pearl and Shell. 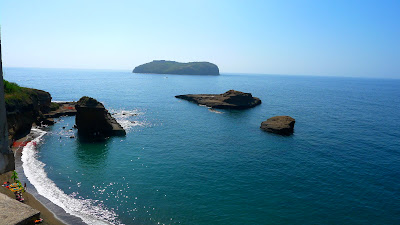 Lunch was approaching. Ashley and I went back to the boat to prepare, passing by the restaurant to pick up our goods. Guiseppe, the younger guarded son of Benito, was there and offered to help me clean the octopus and the scorpion fish, so I wouldn’t touch a poisonous fin. Sweet man, a bit cicione  with tatoos, he was pleased to show me how to do it. He had lived on the island his whole life.

Something was askew, he mentioned that something had happened and he had to do an analasi, but I didn’t understand if he had done something wrong, or something had happened to him. A bit shy and vulnerable this big hunk, he seemed to appreciate me listening to him. We had a sweet conversation. I had nothing to offer him for his help, so I asked him if he would take a “yankee dime,” a kiss for his kindness. He lit up and smiled. We parted ways. 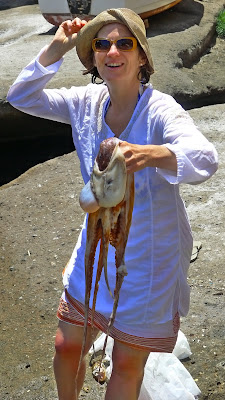 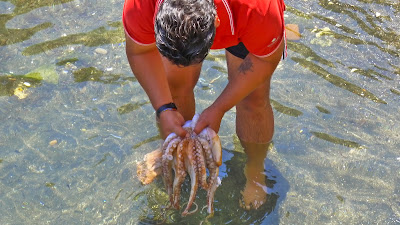 A Mediterranean island is not known only for its seafood, but what comes from the land.

All islands are rich with rabbit, wild herbs, fruits and some vegetables—and in the case of Ventotene, beans. Especially lentiche, lentils. Beans were a favorite food of the Romans and and no doubt, lentils exist here because of them. Once called Pandateria, the island has a long history of banishment, starting with the emperor Augustus, who banished his daughter Julia the Elder in 2 BC, as a reaction to her excessive adultery. A long list of women followed up until 62 AD where Claudia Octavia, the first wife of the Emperor Nero, was sent to be executed on orders from her husband. As one of the Pontine islands, it was the favorite exile from Rome, a place where people were left to starve to death. It is most upsetting yet encouraging that we have a least come this far in the emancipation of women and that the island now offers so much bounty.

As you can imagine, islanders need to be self sufficient and luckily, most islands in the Med offer an incredible source of goodness. We passed a hut on our way to the pools, where an eyebrow-less man was selling not only lentils, but bottles of local herbs like oregano, fennel seed, dried fennel fronds and flowers, and rosemary. He had mixtures of garlic, oregano and pepperoncino. Entire jars of pepperoncino.

He gave us fresh herbs from his garden, including minta e prezzemolo, mint and parsley, similar to what Benito had used to baste his grilled fish. His name was Ermano and he had grown everything. Hermano was very happy to see us that day. We bought several of everything and had pictures with the girls. 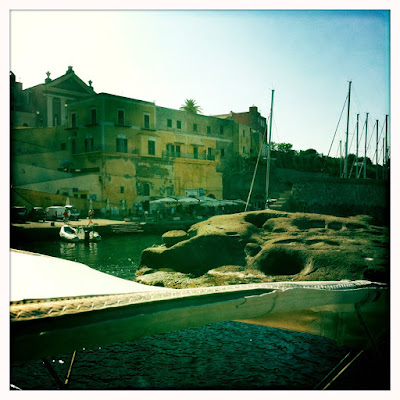 Later down by the port, we found his brother Vincenzo. His little truck was full of preserves that he made from anything and everything. He had squash blossom marmelade, fennel marmalade, red pepper spread, pickled vegetables of all kinds of sottolio (under oil), of artichokes, garlic, dried tomatoes, tuna…

We made a pasta with delicate onion, squash blossoms and ricotta as well as an aqua pazza with the fish for lunch. The octopus salad with potatoes would have to wait until the evening, when we would be anchored off the shores of Ischia with a few bottles of Falanghina.

It was time to go. We pushed off in the mid-afternoon with the sun at our backs. No wind this time to carry us to our next destination, we had to motor sail. As we boom-boomed out of the port, Nat, our New York dancer, Katie and Ashley, both dancing yoginis, gave the Ventotenesi a warm goodbye. I saw Guiseppe sitting up in his fathers restaurant and waved and said, “Ciao Giuseppe!!” He waved back and yelled, “Peggy! I lOVE YOU!!’

I smiled, happy to have made a new friend.

20 minutes into our sail, a rubber motor boat came screaming up to our boat. Giuseppe has his hand held high with something in it. I thought perhaps we had left something behind. He waved and said in Italian, “Questa e per Peggy….it is an occhio di Santa Lucia! Porta fortuna!” It was an eye of Santa Lucia. A shell that has a hard orange spiral, said to bring good luck. The young girls swooned.

I knew I would return to Ventotene, not banished, but by choice. And one thing’s for sure—surely I wouldn’t starve to death. 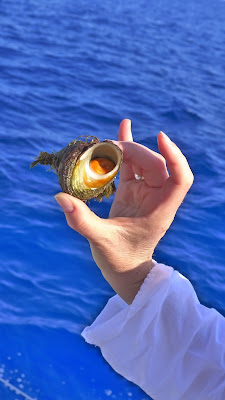