Where The Wild Wind Sings

Leaving the long stretch of Sidi Kaouki’s endless camel colored coast, is always poignant. It’s a refuge. Unplugged. A village with a few stone houses and a camel or two. A few cheeky donkeys bray, and oblivious chickens squawk and peck. You can sit for breakfast outside on the patio and watch a few herds of goats pass by the open doorway with their 8 year old herder. A few minutes later, a lone Berber woman, covered head-to-toe in mismatched patterns, strolls by with her cow. The wind can be fierce. It can be gentle. You can spend the day feeling it pick up and die down. It mimics one’s slowed-down breath. More subtle feelings have space to arise, so often buried under the harrang of too much thinking. The eyes see things that never registered before. This place has always been like this. It eases the mind.

Time to go. The “blue and white ”Essouira taxi burns up the straight three hour trek back to Marrakech. It passes the one and only indigenous argan forest. It’s spiky branches so free form, abstract and full of tiny yellow nuts, so loved by nibbly goats that they levitate themselves right up onto the highest branches. This stretch of road always reminds me of the first time I came to Morocco with two close friends. We arrived late at night. It was 2 am when we left Marrakech, after a midnight supper of chicken tagine and hearty bread.

We headed off into the night with a toothless driver in an old beat up blue and white taxi on what seemed like an endless stretch of road. My friends fell asleep and I was left with my own white thoughts about ‘what happens if’. Meanwhile, the stars were immense, shining down with little moonlight on shadows and silhouettes of distant palms, robed figures walking in the dark, vast flat plains with faint light coming from an occasional low earthen dwelling. We passed strips of town, long and narrow buildings with arches; a loggia of mystery

There was a man rolling a barrel down the road at 3:30 am. We mistakingly hit a dog. At least the driver stopped. The dog was stunned, but not dead. My friends lay dreaming asleep, while I sat dreaming awake. Where am I? I was cold. I couldn’t get the driver to roll up his window, or it was broken. Something in me felt slightly unravelled. Fear of the unknown has that quality.

By the time we reached Essaouira, the town was in a deep sleep. Yet, the nightwatchman from our hotel was there with his cart. We piled our luggage on, said goodbye to our driver, who smiled a toothless grin and we walked through the empty ‘place’, down dusty alleyways with the occasional dead fish, breathing in that familiar, wet, salty sea air. It’s now 4:30 am. The call to prayer comes over the loudspeaker in a loud and crackly “Allah o Akbar!” Glory be to God! I felt the same, happy to have arrived at this far away door.

Inside, all was orderly, white, calm, silent and peaceful. A chest of blue and white dishes greeted us. Roses, red and plentiful, were on all the tables. Our room, open, with a loft, beckoned us. I chose the small, cozy loft. My friends were chatty, and more than likely ready for tea. I, on the other hand was a corpse.

“Welcome to Morocco”, said the doorman. I fell quickly into bed to the sound of birdsong, sweet and melodic. At least birdsong is a universal language, I thought. The breaking light of day did not dissuade me from a potent sleep. 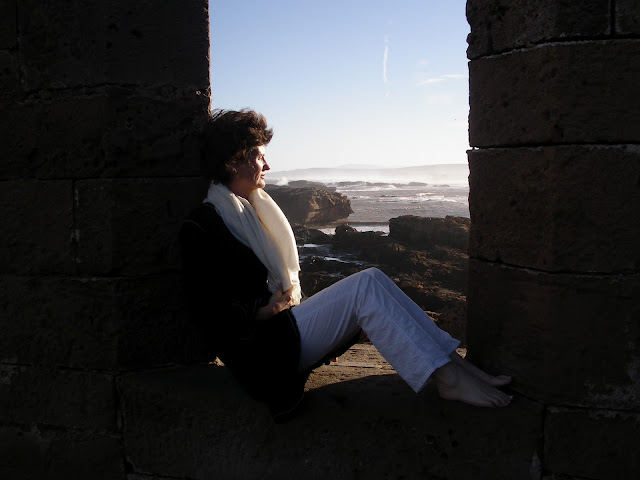 My first adventure to Essaouira was a memorable one. Not without love, discovery, magic, a falling through the veil to another way of seeing the world. Leaving there was never easy.

Leaving the edge of something potent, a bit wild and untended takes discipline.

Once I saw the lines of separation~ between me, the tree and the earth~dissolve. It was a moment I will never forget. I was not on mind altering substances. It’s just that my heart

had cracked open and like a thousand pedaled lotus, it bloomed and I could feel the various chambers that hold shadow, exposed. I was in a taxi going down a country road. I looked to my right and the tree ,the earth and the sky was lit up in outlines of color. It lasted a split second. Mother Africa winked at me.

Then there was the return of all returns that I will never forget. I was headed back to Marrakech yet once again in a blue and white taxi. It was September 11th, 2001. I pass the familiar landscapes, the argan forest, I see a small boy on his donkey high on the horizon. It’s hot and there are people walking around in wool from head to toe. The windows are down and the wind is blowing my hair into my face, but I don’t care. I’m steeped in this culture, infused like orange blossoms in water. I’ve hit the resonant note in myself that is  not alone, but in tune with everything. I am the air. The boy riding his donkey. A woman sitting in a taxi. 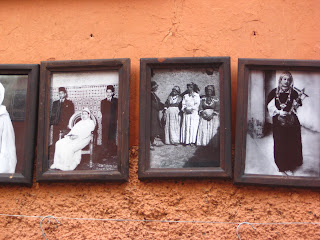