The only way to see them is by foot, by boat, by donkey, or by camel. Camel is the transportation of choice in these parts and nothing sounded better to me than the contrast of a camel, ship of the desert on sand, flanked by an endless ocean.We packed up our camels from “Le Kaouki,” a sweet whitewashed, blue-shuttered respite that overlooks the village of  Sidi Kaouki. From here, we could head out well-fed on kefta and homemade bread.  Well provisioned, we had collected our basics from the locals. Eggs. (On the back of a camel?) Vegetables. Bread. A tagine. A gas burner. Salt. Oil.  A few beers (Moroccan Especiale!)  The idea was to get fresh fish from fishermen along the way. A dinner of grilled Dorade was in our future, as well as a tagine for the catch of the day. 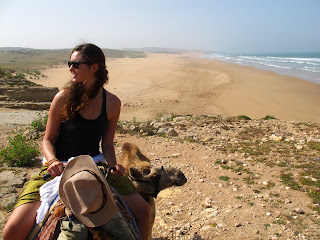 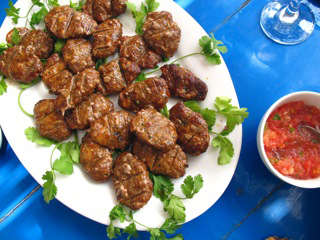 Our sleeping mats, strung over the camels for us to sit on, created much needed extra padding. Unless you are used to riding a camel, you can get sore really fast. Once you get into the rhythm, it’s a gentle massage for the lower part of the body that doesn’t move enough. Comparable to doing  cat-cow poses in yoga or…pole dancing. We had three endless beaches to cross, and even though we left late in the day, there was no worry or thought of time. No hurry to arrive at a destination. We weren’t quite sure where we were going, but we knew we had a tent, some food and dry land to sleep on. 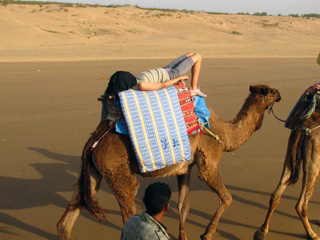 What’s beyond the rocks? I asked myself each time I had visited Sidi Kaouki. I was no stranger to camel riding, but never went further than I could see from the beach by the village. It was time to explore.

Some find Sidi Kaouki off the beaten path as it is. I have treasured it for that reason. A small inn infused with candlelight at night, and wood fire to heat water for the showers. Even that would be luxury soon. Now was time to go beyond. It wasn’t the Sahara and our trek wouldn’t last for days or weeks. It was doable and fit into what we could at least taste. 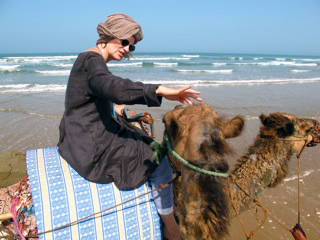 In a time when the majority of the western world is afraid to travel in North Africa, my assistant extraordinaire, Ashley, and I felt compelled to show our trust in the Berber people. Having traveled in Morocco for 10 years, I have found over and over nothing but authenticity and the best of intentions. I have learned confidently to give the benefit of the doubt. Taking to the road with a few swarthy camel drivers, off to an unknown location down a string of deserted beaches in the middle of nowhere, might not have seemed a good idea for two women alone. But for us there was no hesitation. I had practically watched Abdullah and Kabir grow up over the years. I knew nothing of them really, but always found them to be genuine and kind; their eyes lighting up every time they saw me, flashing big toothsome smiles. I felt safe. 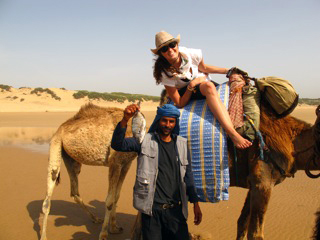 Ashley and I were set to go when our friend Moulay Essakkoli, part owner of Zid Zid Kids, makers of children’s toys and games in Marrakesh, wanted to come and bring his two children. At first I thought, this is going to change the dynamic of the journey, but then I thought, good. Now a mini group to try this on. Moulay had helped me negotiate the trip in the first place and no doubt would enhance the trip with his charm and language abilities. No longer “solo intrepid women travelers,” but now a sweet group. The children, Noor and Zak, 8 and 10, were ripe for an adventure and their dad had taken them out of school for the occasion. Little did we know how comfortable they would be with the camels, Zak hand-feeding them and “driving” his camel before we knew it. Noor, when tired, would lay down on the back of her camel while it loped along. 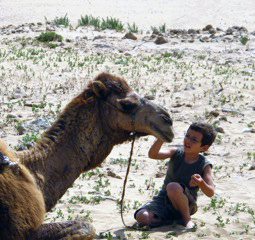 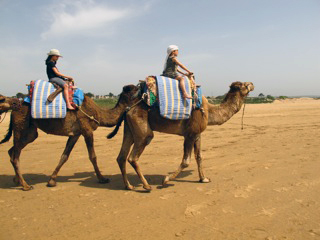 Zid do! Zi do! Abdullah and Kabir stayed with us as we sauntered down the beach. Hamid ran ahead with the other two camels to set up camp. Noticable how fast they can move, when prompted. We rode and walked the long beaches con calma, letting our thoughts go and our minds relax. We stumbled on fisherman after fisherman with empty sacks, until we finally found a good fish for the tagine. Abdullah stood proud holding the fish by the tail for the photo.

Zak ran up to the dunes, tumbling down with ease and abandon, he jumped around on the rocks and spent time with the camel drivers. He and Noor, fluent in Arabic, French, and English had the lay of the land figured out. No one spoke Berber though, and communicating with Abdullah and Kabir was still a bit of a challenge, no matter what language we spoke. Yet, they took excellent care of us, almost intuiting our every need. 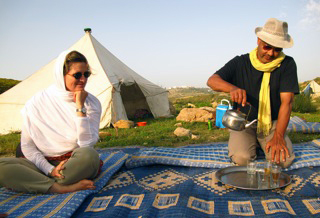 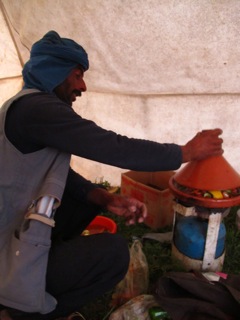 Up and over the last promontory, we found our campsite next to a waterfall. The tents had been set up near a freshwater stream in a green valley, rich with reeds and grass where the camels could graze. Night descended. Wood was gathered and a fire was made. Mats were set up for tea while we did our various things. I wrote in my journal. Ashley played cards with the kids and showed them yoga poses—that is, when Zak wasn’t tumbling down the dunes—while the boys made us dinner. Diligently they sliced and diced by the light of the lamp. They put the mats close to the fire for us to sit on, folding one in half for a table, setting a sack cover on top for a tablecloth. A candle in a cut-off plastic bottle was stuck in the sand to light our table and we dined on grilled fish, fanned in the coals between a folded grate, and Moroccan salad: cut up cucumber and tomato with parsley and salt. 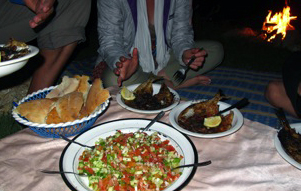 After dinner Hamid started playing banjo. Kabir grabbed a plastic water container for a drum and Abdullah played forks on the metal gas can. Berbers are no strangers to improv. They find what they need, or don’t need it. The elements have historically been up close and personal, but not always comfortable. Like aboriginals they are not bothered by darkness, cold or hot, not even long hours of walking in the wind. To me, it seems they are free. 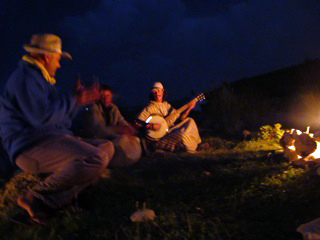 Abdullah puts down the forks and starts dancing. He dances well, loose and uninhibited. He grabs my hands and pulls me to dance with him. I try to let go enough to follow his footsteps. The moon is almost full. There is light bouncing off the tent, the camels, the reeds and his twinkling eyes. Abdullah’s turban tail is tucked up for the night, not down around his neck to protect him from the sun. His smile is child-like.  Yet the look in his eyes is as long and wide and mysterious as the beaches he walks on.

Everyone turns in, snuggled underneath a woolen tent, warm with blankets and sheets from home. Except Abdullah. The next morning at dawn, I get up to have a look at where the camels slept. Some were folded down and some were not. Bare naked camels without their saddles look ancient next to sand and reeds and grasses. And myself walking among them on a centuries old campground.  Still and docile, I could talk to them. Get close. It was a quiet moment during the sacred time of the morning. 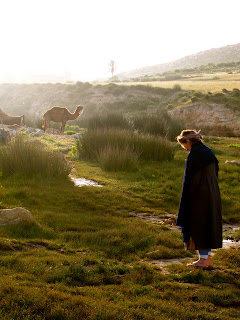 I walked along the saddles and something rustled. I hoped it wasn’t a snake. Afterall, we were in the wilds of Morocco. Suddenly, a pointed head popped out—Adbullah had made a tent by throwing a rug over the saddles and a mat on the ground. He was dressed in his jelaba, with the hood up. He smiled, got up and stretched. Moulay said he slept out side to protect the tent and the camels. In Berber tradition, every group has a protector.

My respect for the Berber people grows in depth every time I visit Morocco. They are a quiet people, but generous in every way. They think to be kind. They are a community, a tribe, still. “Individuality kills the family,” they say. Even as lone camel drivers, they are not self-centered. Abdullah and his boys took very little money to spend this time with us, set up a camp, cook, give of themselves in music, sharing their ways,as if the money didn’t have that much value. 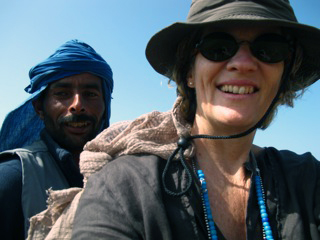 I invited Abdullah onto my camel for part of the way back. When I look at him, I see my Italian friend Alfonso from Puglia. Swarthy, curly hair, a stain on his teeth from too much smoking, but the twinkle in his eye, the deep and spacious gaze…that’s the trust that takes you down a deserted beach without worry. I knew he was tired. Plus, it was fun guiding the camel, rather than just being led. He sang a little up high with a different view, waving his arms around with his camel stick like a joyful conductor, making all of us laugh.

Berber omelets were waiting for us when we got back to Le Kaouki, along with hot showers and a massage. Just restorative enough for our next journey up into the Atlas to Imintanout, for another Berber experience. The famous group, “Oudadin” was recording and we had been invited to listen. When we got there, I noticed that they were playing the same music we had heard in camp and Hamid, the banjo player, looked just like the main player in our group from the beach. One very famous and electric. The other a soulful camel driver, playing acoustically to the moon. 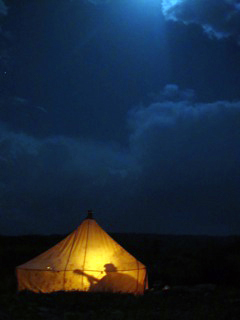