Angelo Cabani is a mentor of mine. A spectacular chef, with big eyes, a big mustache, and a huge appetite for fine and tasty fish.His restaurant, Locanda Miranda, is located in what he likes to call his “gastronomic hotel” by the sea. It is perched above the Bay of Poets in the pastel village of Tellaro, ancestral home of his family since the 13th century.

This Ligurian coastal settlement has seen it’s share of marauders since the days of the Saracens.

According to local legend, the watchman fell asleep and the rope to the bell tower fell into the sea. An octopus from the rocky shore below got entwined in the rope and trying to break free, woke up the town with his continual clanging. As luck would have it, the town awoke, expecting an attack just as a ship of Saracens were preparing to ascend. Lets just say that a lot of hot boiling oil was used and the village was saved…by an octopus! Angelo doesn’t often use frutti di mare, but prefers deeper ocean fish, scampi and smaller fishes that swim around the rocks.He cooks with traditional recipes and ingredients, but steps it up a notch. “People don’t go out to eat what they can get at home,” says Angelo. His challenge is to make it interesting.

His kitchen, at least 15 x 27, is full of copper pots and a very long royal blue French stove. He is master and commander of his domain, barking orders, flipping pans full of pasta and practically painting with the various (olive oil-based) sauces he serves along with his sublime food. Angelo Cabani may be more artisan than chef, although he would call himself more simply “a cook.” 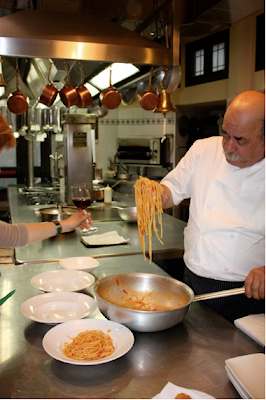 I created a program with Angelo some years back, which we romantically called the “The Ligurian School of Poetic Cooking.” Eat Poetry was its byline, and I took gourmands there off and on for seven years. For the last 15, I’ve been making a yearly pilgrimage to be near my mentor in the kitchen. We are simpatico, you could say. I learned early that if I let him poke fun and tease me, I could watch and learn. And watch and learn, and eat, I have done.
It’s hard to replicate a master. Even harder to get fresh fish delivered to your door an hour after it’s caught. But once in a while…ci vuole!! One must do it!

This dish came to me on an unusually cool Colorado day in May. Artichokes in season? Check. Potatoes? Well enough. Fish? Not branzino as I am not in Italy this evening…but a good piece of halibut, wild caught from Alaska? Not bad.
Here’s to Angelo, the best and most creative, the most modest master chef-“cook” I know. 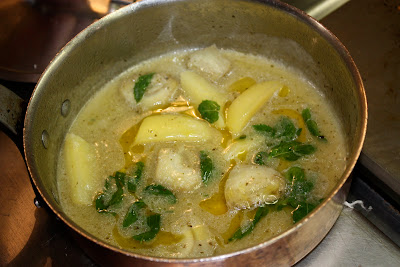 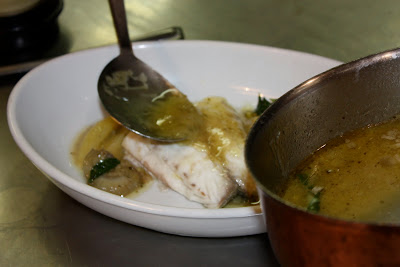 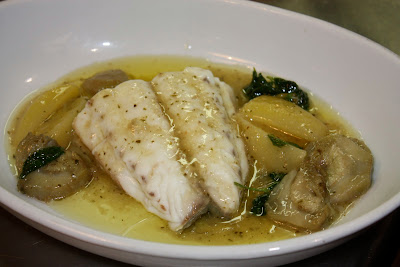 Recipe for herb broth:
one bunch of marjorum
one bunch of timo
two long sprigs of rosemarino
6 bay laurel leaves (fresh if you can find them)
a gallon of water
3 cloves of garlic, blanched
white wine

Bring a heavy pot of water to boil then turn off. Stem the herbs and let them steep in the pot. Add the garlic (that has been blanched 4 times quickly to “tame” the wild flavor). Blend contents with broth and add 1 cup of white wine. Freeze in cubes for future use.

For the main dish:

Start with a heavy pan and add 2 cups of the herb broth. Add potato and raw artichoke- let it braise. (if not artichokes, then olive). Flour the fish and put it in the broth to simmer and steam. Press with your finger to see that it springs..theAn it’s done. Make sure the broth has reduced some and emulsified. Dish fish into a bowl and pour some of the sauce over it with potatoes and artichokes (or olives) on the top or to the side.
Variation: Orata with potato and olive.