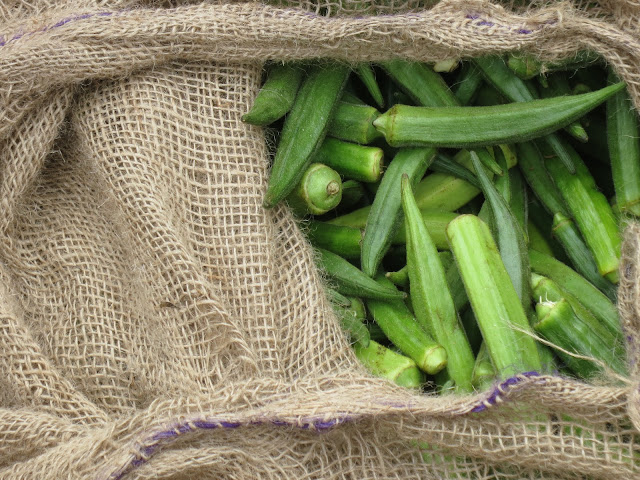 Candlelight graces a table on our houseboat in Kerala. Tears well and fall down my cheeks at the taste of okra. The cook comes in, “Ma’am are you alright? Was the food too spicy for you?” I smile and nod subtly sideways, the Indian way that says, no, yes, maybe.

“Her father died two years ago,” my friend tells him. The cook’s bright smile closes as he says, “I’m sorry.” He didn’t question why tears should be falling from something that happened a long time ago. In India, crying is normal.

Meanwhile, I sat there feeling the tears roll down my face fresh as rain, moisture on dry thirsty skin. I was not at the table in my mind, but found myself clear as the early morning in a memory of being in the family garden with my father.

Peppers were all hot and ready for pickling, the tomatoes were heavy on the vine, pole beans were falling from the trellis and the okra was sticking straight up, tips to the sky.

I remember okra growing in my grandfather’s garden in the deep-southern terracotta-colored dirt of Clay county, Alabama. That orange earth, particularly infused with minerals, never lacked for nutrients. Neither did we. The taste of corn, black-eyed peas and, of course, okra gave a lasting flavor in the mouth of something you wanted more of. Long stems grew tall with subtle yellow flowers in springtime before warm, sensual summer nights encouraged the nub of okra to swell almost overnight.

As my grandfather hoed around the plants one morning, he heard a squeak. He had come upon a bed of baby rabbits. He brought them to me with the eyes of surprise. I fed them a baby bottle. They didn’t make it.

Picking okra is prickly business. A chance to wear papa’s worn-out long-sleeved, red flannel shirts. I liked to wear his striped overalls as well, the older the better to play farmer. My sisters and I played in the old smokehouse, hoed in the garden, drew water from the well and amused ourselves playing hide and seek in the corn patch.

Cutting okra was slimy. Putting it in a paper bag with cornmeal and shaking it was the way to take care of that. Dropping it in hot corn oil and watching it turn golden, is a visual memory that sticks, a fried delight that can’t be beat. With a rain of salt, it gives a crunch of southern satisfaction.

Fried okra is a staple in the south with black-eyed peas and cornbread.  Not everyone’s friend, okra becomes triple unxious, seedy and slithery not unlike a cooked snake, but less chewy, when boiled. I have eaten snake before, rattlesnake, that had been caught and killed in the hills of Tennessee and skinned for its skin. I tried it. I can assure you it tastes like chicken, not boiled okra. I’m not saying that okra tastes anything like snake, just that if you wanted to make an obsequious Halloween dish, blindfolded, boiled okra would do it.

Those times are gone along with grandfather and my father. In the familiar heat of Kerala, on a houseboat, I had a conversation with childhood and a loving memory through the association of a vegetable. Visions come not only with psychedelics, but taste memory in bright living color. 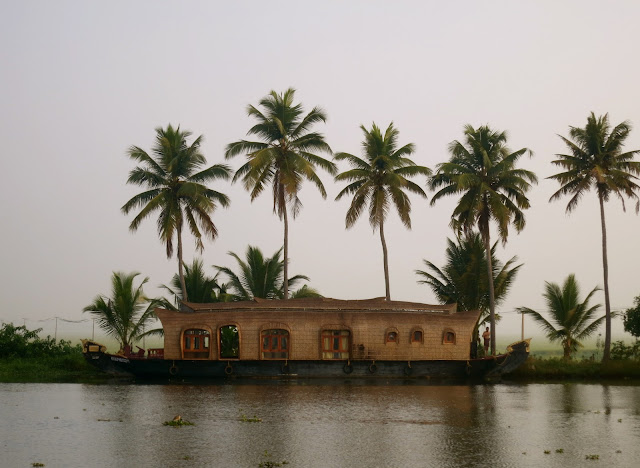