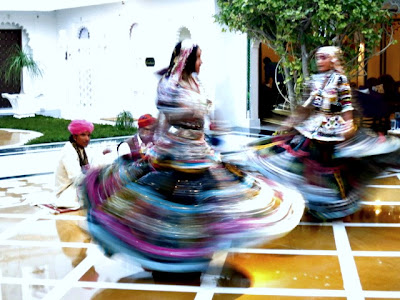 Everyone, including me has had reservations about India. It’s large. Daunting and Deep. It’s one of those places that intrepid travelers go. Those of us that are strong, curious, and unaffected by the extreme.

We have heard stories from our friends, and friends friends, about coming home with their lives forever changed. Perhaps they have even had a taste of enlightenment from studying with a guru or yoga master. Lost weight. Become vegetarian. Started wearing patchouli. I have nothing against patchouli. I like the smell and used it as a teenager, emulating those my sister’s age, who had made the great trek in the late 60’s and early 70’s.

When I think back to the that time, it was revolutionary. Our minds did change. We got a glimpse of how the other side approached life, what they ate, how they behaved and related to each other in a completely different culture from our own. Yet, it seemed further than far… east. A place if you went, you would not come back the same. 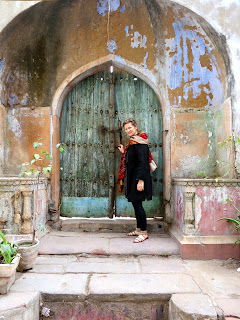 In 2004, I had the great pleasure of visiting India for the first time. I did not go as a back-packer. I did not go to study with a spiritual master. I went at the invitation of a friend of a friend, who wanted to set me straight about India.

Mohan, I later realized, is a man of power. A young, vivacious entrepreneur, with insight and finesse in the travel business. From the start, I realized that I was not only in good hands, but I was going to see a different India than I had heard of from my friends.

As a constant traveler, I am used to roughing it. I have grown accustomed to changes, transitions and the unpredictable. What was not used to, is the level of attention that I got from Mohan and his staff. No one likes to end up in a foreign country, jet lagged, in a time zone eight hours different than your own, not speaking the language or knowing where to go. I was met at the gate, taken to the baggage counter, then consequently taken to be dropped off with a private driver who took me to my hotel, where I was greeted by the manager. No matter who you are, tell me, is there anyone who wouldn’t appreciate this? 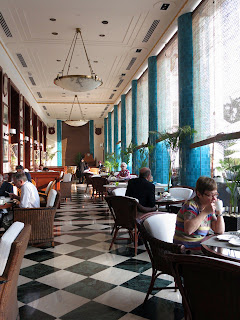 A smartly dressed door man greeted me with a salute. His plume fluffed in the air. From then on, everything in India seemed to glide as if skiing down a perfectly long and gentle slope in the afternoon sunlight. The first stop: The Imperial Hotel, a lovely place to lay one’s head after a revitalizing ayurvedic treatment from the spa. It sniffs of the old Raj, but in modern days boasts a time gone by, still available in present time. This was only the beginning.

When I mention India, most people express reservations like, “I’m afraid of the poverty.” Or the other extreme, “I don’t want to stay in a hotel that might cut me off from reality.” My answer to these questions are quite elaborate. From my experience, I can tell you, that neither is a reason not to visit India.

Poverty is a big subject. It exists in the world in a grave way, and more than likely right in our backyards. There are people that live with very little, people that live in horrid conditions, and people that are compromised. It is our right to know how our fellow humans are living. In a country of 1.2 billion people in the 7th largest country in the world at 1, 269,000 square miles, there is more than a fine number of people that also live well. Their simple or sophisticated lives no different that what you see in our own country. 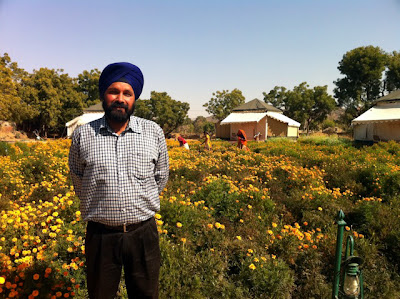 India has a climate variation from the Himalayas, almost to the equator. It is a country of contrasts and extremes. It is also elegant, regal, inspirational and mystical. The country is also having a heyday in technology. The cities are large and filled with an educated and sophisticated lot. 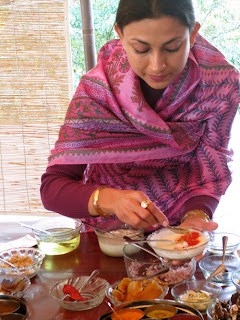 As I look forward to my next trip, I feel goose bumps. There is a way of life, not unlike Europe, that centers around a rhythm of the day. Family is golden and meals are the glue. I can smell the spices tempering in oil, see a lovely table set with various bowls of goodness and look forward to getting my hands washed, ready to gather rice with dahl, mixing in a tasty vegetable with a touch of mango pickle and popping it into my mouth. Noticing the intimate contact of finger to mouth. There is a softness and gentleness to the people in general, and a sense of humor that keeps you on your toes. As a nation, 75% of Indian people believe in karma, the law of cause and effect. This keeps them mindful of their actions. A greeting is a warm “Namaste” (I see the God within you) with folded hands in prayer position, in the marketplace and on the street. Not just after a yoga class. 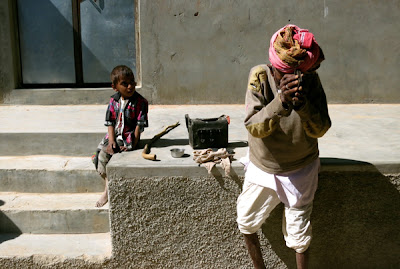 India has something special. A religious melting pot that shows us that people can live together with diversity. A Muslim, Hindu and Christian can work in small quarters because at heart, they are Indian. Their sense of hospitality is legendary. “We treat our guests like a God.” There does seem to be something over and above the general “in service to.” There is not too much in the way when making contact. Not based on ceremony, their presence is open and intelligent. They are curious and kind. 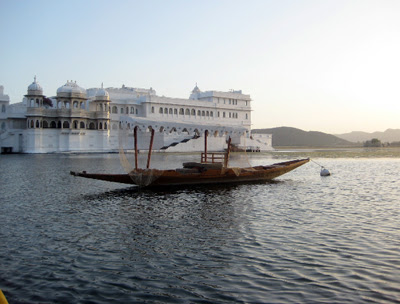 Above all, the aesthetic of the old palaces reek of another époque. We are escorted everywhere with the utmost respect. We rub shoulders with royalty and find them quite approachable and no different that ourselves. We are bathed in a sea of colorful sari’s from the street sweeper to the sweet seller. Every woman carries herself with dignity. The children’s eyes are flashes of light. We absorb buckets of love from walking around such a place and give back by receiving and bearing witness. 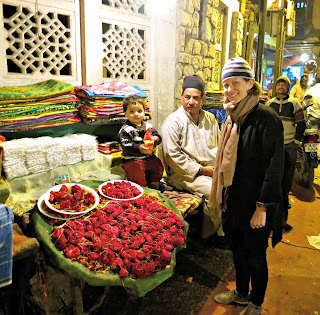 This trip is an opportunity not only to see the Taj Mahal, painted elephants, lake palaces and lotuses floating in a pond. It’s an opportunity to see through our concepts and feel the depth of your heart in a way that only India can open.