Bearing left at the bridge, we leave the GR142 and follow the right bank of the Rio Trevelez, almost immediately crossing a stream over large slabs of smooth stone. Beyond the stream, a yellow waymark indicates a rough path that zigzags up through big bushes of retama.
We follow this path, crossing an erroded, rocky section and climbing towards a small chestnut tree where theres a very old dot on a rock, the path becomes clearer. After winding through a small stand of chestnut, the path climbs steeply then bears right on a gentler slope below a long rocky outcrop tropped with a couple of dead chestnuts.
The rock gives way to stone retaining walls until the path bears left then right to pass a partially dead chestnut, after which it winds up below ans acacia to rejoin the outward route. Turning right here, we reach Ferreirola five minutes later, where we retrace our footsteps to the church square.

This is to give you an idea of the terrain that surrounds the village, if you were to arrive by foot, according to Charles Davis, author of Walk! the Alpujarras.  Not to mention that we hang on the side of a mountain, with other steep and craggy mountains so close as to touch, right outside the door.  There is an ancient rock threshing ground which juts out over a valley. I suppose it was used for separating the wheat from the chafe. It seems it should also have been for ceremony, as it is a powerful ground for being in direct contact with the great unknown. And for this, also seems an internal threshing ground as well. It’s not unusual for me to be in touch with the doubts and fears that lurk beneath the surface which seem to rise like cream and scream, “see me, hear me!” And I look and I listen and I cry. 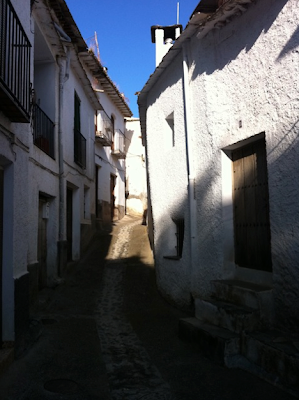 Back to Casa Ana, Anne Hunt’s lovely restored private retreat house, the HQ for our Andalucian cooking adventure.Kim Schiffer, a dear dear old friend from Santa Barbara, California, is making fresh ricotta. While the curds separate from the whey, she roasts eggplant over a flame, to give a smoky flavor to her “smoky eggplant with yellow peppers and red onion.”

SMOKY EGGPLANT W/YELLOW PEPPERS AND RED ONION
2          medium eggplant
2          yellow peppers, cored and cut into 1” dice
1/2c    red onion, diced
24       cherry tomatoes, halved
1/4c   parsley, roughly chopped
1/2c    walnut oil or sunflower oil
2T      lemon juice or cider vinegar
1T       ground cumin
salt and pepper
flat bread, grilled or heated
Place the eggplant directly on a moderate gas flame and roast for 10-15 minutes, turning them occasionally with tongs, until the flesh is soft and the skin is burnt and flaky.  Cool slightly.  Cut in half.  Scoop flesh into a colander and drain for at least an hour or overnight.
Chop the eggplant flesh roughly and mix with all the other ingredients.  Taste and adjust seasoning.  It should be robust and pungent.
Serve with flat bread.