This Bob Dylan song came to me, along with “Boots of Spanish leather,” while crossing the strait of Gibraltar a few days ago. It was no different than any other ferry crossing, just more significant. Leaving Tarifa, Spain’s final beach, for the minarets of Morocco follows the thread of many a famous traveler.

I frequent ferries in Italy, going from the mainland to many of the outlying archipelago. Yet, leaving Europe behind to cross over only 9 miles of open sea to end up in North Africa, has adventure written all over it. Especially for those who swim it.

When I meet fellow Americans traveling abroad here in North Africa, I ask them, “What did you expect to find here?” Almost without exception, regardless of the way they express it, the answer reduced to its simplest terms is: a sense of mystery. 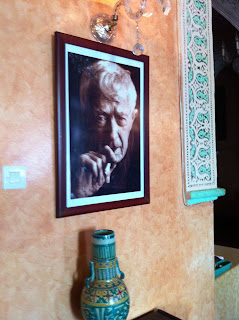 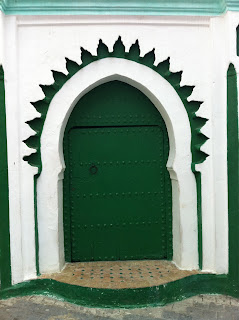 I can only imagine what it must have been like when author and composer, Paul Bowles (The Sheltering Sky) was encouraged by Gertrude Stein to go to Morocco, for the first time in 1931. Tangier was accessible and exotic. A completely different world full of magic and mystery. Unknown places delight the imagination at every turn with intrigue, curiosity, and heightened awareness. It has attracted and inspired artistic expression from the likes of Delacroix and Matisse. Bowles was the ‘go to‘ man for many writers like Truman Capote and Tennessee Williams. Beat poets like William Burroughs, Allen Ginsburg, Gregory Corso, and Kerouac also knocked on the door,  attracted by the avant-garde Parisian playground. Yet, he was no beat poet himself. Even though he had experimented with hash from the Rif mountains and delved in exploration of consciousness, he was an older well-dressed, serious writer and composer.

Influential cookbook author Paula Wolfert, who came to Tangier also as a young beatnik 50 years ago, just came out with a new book simply called, The Food of Morocco. In it she writes,

“I had come to an exotic land in search of “The Other”. I was, I thought, prepared for most anything. I soon discovered that it was I who was actually “the other” and as I explored, and made my way through the narrow streets of the medina of Tangier. It was not the kind of adventures described by Bowles that befell me, but something that I was not prepared for: the seduction of Moroccan Cuisine.”

There was nothing extraordinary about the markets or the streets that we saw, Tangier now 50 years more modern. Yet we could imagine what they were like 50 years ago, when we turned the corner in present time and saw a woman in a quiet square at the well cleaning her fish, her head covered and her clothing simple. She was a shy portrait of the past. I didn’t take her picture.

Remnant bread was gathered and put into a sack and set by a central neighborhood door. Bread is precious and recycled into other dishes, such as puddings.  Still, nothing is wasted.

We stumbled across a doorway where people, even young girls, were carrying trays covered in cloth. It was the community oven, where a man stood at the mouth of it in a pit and shuffled trays of roasted seeds, nuts and bread around. He would dump the roasted seeds into a woven basket, slosh a bit of water on them, then  sprinkle some salt. The seeds would be mixed by tossing the basket up and down. They were pitch black sunflower seeds, not ones that I would want to eat, but supposedly the Tanjawi’s like them that way. 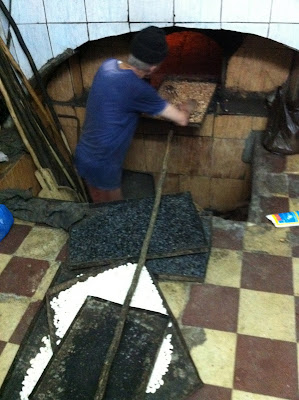 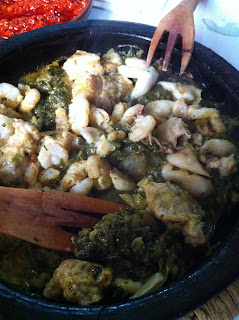 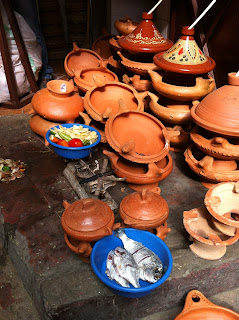 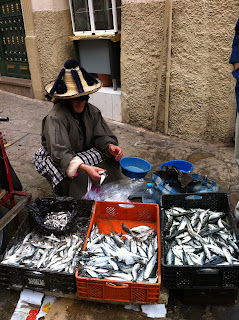 The old man,  tiny with a grey beard and faded clothing, had the sweetest eyes. He offered us a small round cake to try. We were peckish and quite grateful for the nosh. What a hot life to live in the mouth of the oven all day. What a blessing to bake bread for your community. 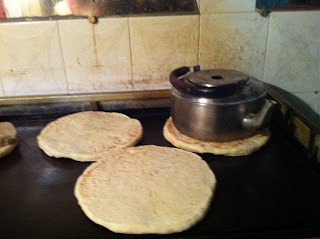 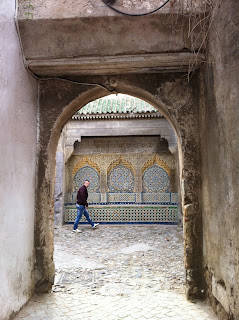 We passed another stall where women were making the breakfast bread. They had their flour cloths out with mounds of dough on top. When they were ready to cook it, they flattened it a bit with their hands and put it on a flat-top stove. To further “iron it out”, they sat an old tin kettle on top, half full of water. It’s uniformed flatness and crust no longer a mystery. Generous and kind, they tore off pieces of warm bread for us to try. At every turn, traditional Berber women with conical shaped hats from the Rif mountains were busy selling something. In their tradition, the women run the business. Whether selling goat cheese, chickens or fresh sardines, they rise early, make their way to town, trade, tuck their money into their skirts and head back to the hills.

Our lunch came next, and by this time, who was hungry? We were taken to simple place, La Tavern de Poisson; a Moroccan fish restaurant populare, where we were served a brothy fish soup with barley couscous out of a large terra cotta vessel heated over a standing coal fire. It was settling and delicious. Two savory dishes followed, another seafood dish full of the tiniest squid, shrimp and white fish, with celery root and spinach, spiced with lemon, cumin and ginger. Quite tasty. Grilled John Dory and Sole came after, with baby shark skewers on the side. No wine of course, but Hassan the waiter, who looked

like a genie, took us into the back room where he showed us that he was brewing figs, grapes and their stems, quince, apples and who knows what else. It is their own special non-alcolholic ‘vino di casa’. Odd to drink with fish really, but refreshing. Freshly plucked pomegranates and sweet strawberries were served with honey for dessert. 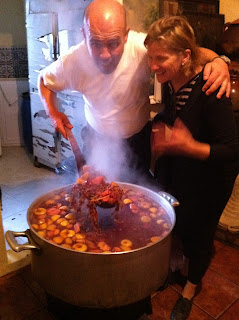 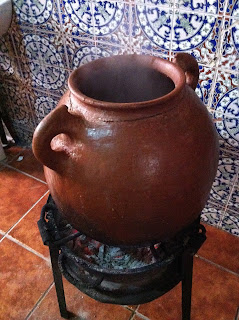 Our day in Tangier came to an end when we met our driver to Fez at the historic old, classic

Continental Hotel. We said goodbye to our guide, SaID, and hopped into the car with Hassan, to take

us 5 hours south to Fez. An hour later, he pulls over and starts retching violently. “Bad Fish for lunch”,

he says. We race through the night on two lane roads, dodging trucks full of sheep and men, boys on  bicycles, donkeys bundled with grasses, dogs and donkey carts full of Rif mountain tradeswomen.

He stops, all in all, 3 times to retch before finally arriving in Fez. We snake through the streets with a man who carts our luggage and turning the last and final turn to the left onto a broken road with bricks laying about, he knocks on a door and points to the name. Dar Roumana. 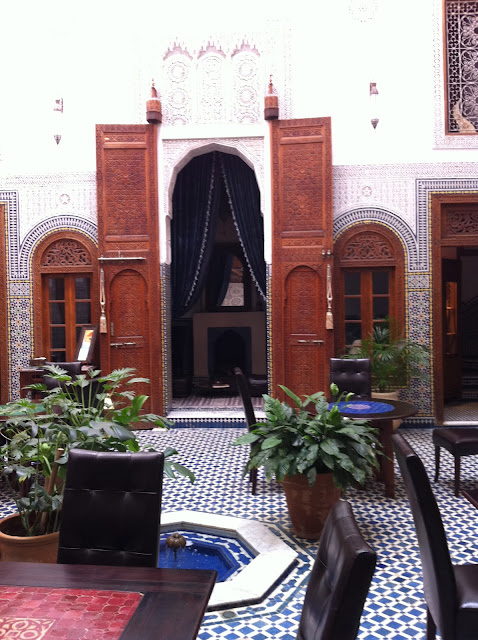 From monotone sand color of stone, building and streets, the door opens onto a kaleidoscope of blue and white tiles and a welcoming dining room set with linens, soft music and a fountain. Home~at least for the next few nights. Ginger pumpkin soup and sea bass calms the nerves.. creme brulee heightens the spirits~ but nothing quite does the trick, like the gin and tonic.

My friend Kim, still white from the journey says…”make it a double please.”

Don’t miss out on Peggy Markel’s next Culinary Adventure and Slow Food tour. We’d love for you to join us! Click here to learn more.