Our Captain: A Man of Substance

His head fell into my lap with exhaustion, preceded by the rest of his Neapolitan body. He was wet and cold and the night sea water was rough and dangerous.

A fisherman’s trawling net was caught in the motor of our sail boat. A family of seven and a crew of three were with us on an overnight transfer from fire-breathing Stromboli in the Aeolian islands, off the northern coast of Sicily, to the great seaside city of Napoli. Darkness fell and the boat motored on. It was rough, our 46-foot Beneteau swimming upstream directly into the wind. Tough conditions for sailing in any case, but more pleasant to navigate if not been in a rush. We needed to get the family back, so we motored full-throttle.

We waited for the darkness to bring calm, a chance to sit down to a proper dinner, but that calm never came. Unusual for the Mediterranean.

We were hungry but afraid to eat. The sky was clear and stars appeared, but the sea churned as if the wind had an invisible hand in the stirring. It was going to be a long night. I gave my guests bread with honey as to comfort.

I went to my own cabin near the prua to try for sleep though the dishes were crashing around in their holds. A stray closet door kept breaking loose, swinging open with a bang. With my son, Graham, helping watch I shut out the chaos in my small cabin. Five minutes later, hearing a huge noise, I bounced up and ran out to the poppa, the stern, to take a look.

Captain Nardella, 36, knife in hand, was stripping off, heading into the crashing water. A fisherman’s trawling net was tangled in the motor. If he couldn’t get it loose by hand, he would have to cut it. He knew that if he didn’t free it, we would have to wait for the fishermen to come to us, which would take hours, equivalent to a flat tire in the middle of nowhere in a storm.

Dripping, he came up onto the deck and revved the motor stronger, standing in his wet tee-shirt. I offered him a dry one. He wouldn’t take it, the wet shirt drying on his body in the cool wind. His bare legs were exposed; hairy, tan and strong. Once he was sure we were out of danger, he felt the cold. A deep chill set in alongside the exhaustion. He bundled in a wind parka while I took a turn on watch.

Sitting cross-legged with my back to the boat, I told Tony to rest his head in my lap. It would keep my legs warm and give him a place to lay his head. There were no other dry places to sit on the boat. He collapsed and I covered him in the only wool blanket on board.

Jumping into the waves had been heroic, risky and a bit renegade. A short rest was in order. He was tense and trembling. Trying to get a few winks in between watches is a captain’s classic dilemma. He would get comfortable, then shoot up to look around, then close his eyes again.

I stroked his forehead, trying to relax him. It relaxed me as well. We were in this together. He turned onto his side and ever-so-gently put his hand on my crossed leg to brace himself. It was the touch of a gentleman. I looked down at this man in my lap, this hunk of courage, so gentle, sweet, capable and intelligent and…felt a pull in my heart. His broad shoulders fit into the curl of my legs. It was not just his love of the sea, his spontaneous opera when at the helm, he was not only a capable captain, but a sensitive intellectual with a PhD in wild orchids. (Napoli was once the cultural capitol of Italy and the place to send your children to be educated.)We spoke once, on the bow of the boat, about his good fortune. He was full of gratitude to be born in Napoli, the son of a doctor, at the foot of Vesuvius in a village of sailors. He spoke willingly about his Napolitanita, how they thrive on drama, deep feeling and the friggatura; the clever getting away with va fan cuolo rule-breaking that delights a free soul and their appetite for living in the flesh, eating well,living large, simply and sensibly.

When the elements were with us, instead of against us, sailing with him was a blue dream, like being on the back of the surfboard of a skilled surfer, going up and down the swells with controlled abandon. Whehew! Fantastico! Che pezzo di oumo! What a man!

How I appreciated the man he had become. One to scoop up, to have and to hold. It wasn’t the years between us or the fact that he was already taken that made it impossible. Or that I have no Neopolitanita’ in purezza to match, fiery and demanding enough to hold the line. Nor do I have soft cappuccino-colored skin. It wasn’t about that.

I missed in that moment, a man of my own to adventure with, wondering if there is such a match for me. There was no rain, but my cheeks were curiously wet. Emotions tumultuous as the the sea.

Then I realized; I am forever meeting and adventuring with amazing men and women in my work, all the time. Relationships can be geographical, about place, and connection. About the wind. Something unspoken. A glance. Trying to keep others and each other safe in a storm. An unconditional relationship, strong, available and true. 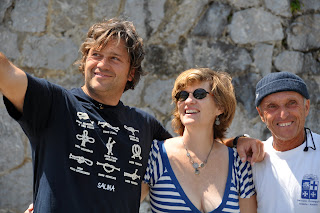 We eventually arrived safely in port after 22 hours of rough seas, what normally takes 16 on smooth. The drama, and the tenderness, now a thoughtful memory.

Enjoy reading this post? Here are a few more we think you may enjoy: